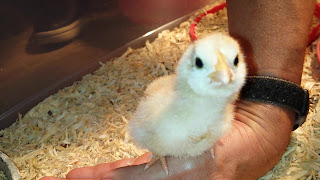 Luckily life goes on and a new day brings new hope.  It seems that our official new chick count is only three.  Something must have went wrong with the eggs during the final hatching out process.  After we removed the first four chicks from the incubator, none of the remaining 13 eggs continued to hatch.  I'm sad.  And the 4th chick to hatch was quite weak and did not make it through it's first night.  I buried it in our backyard in Libby's Garden, where we buried our dog Libby 4 years ago. 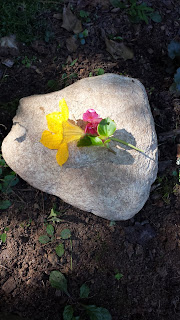 Death is never easy to deal with, but it is an inevitable part of living and especially living on a farm, even a small, urban, hobby farm. We all know that losing a pet is difficult, but for me, even losing a semi-pet chicken can be very hard.

The good news is that we are blessed to have a wonderful menagerie of sweet, friendly, entertaining animals at our grange.  I hope you all will get a chance to meet them sometime.  Until then...Here is something to make you smile.

Posted by zinnias way at 4:50 PM No comments:

The Rest of the Story...Goodbye Mr. Roo, Hello Babies!

It's a boy! It's a girl!  It's a....well it's our new baby chicks and we don't know for sure what they are right now, except cute little fluffballs, the last link to our infamous Mr. Roo.


Tribute to a Rooster

Mr. Roo started off as a cute little fluffball himself a few years ago, but became known for trapping people in our garden, chasing innocent helpers who were just trying to feed him and his girls and repeated tempted ambushes which were successfully, thankfully thwarted by our loyal protector and his greatest foe, our Aussie/Pyrenees dog Margeaux.

But enough is enough and one lovely summer evening just a couple of weeks ago, as I was finishing washing up our dinner dishes, I looked up in surprise as my husband stormed through the door and announced, "I killed the rooster!"

That rooster was pretty mean and getting meaner it seemed, so much so that we had not even let our girls out in the yard to free range because along comes the rooster....no peace.

Now it is quiet. No more early morning crows. No more cocky announcements of " Here's the food girls!" throughout the day.  The energy on our farm is calmer now.  I was sad at the loss of our Mr. Roo.  He was a very beautiful boy, a tough boy, just doing his job too well.  But, I am thankful for the peace returned.  I am thankful for the bravery and the heart of my husband who was able to take care of a difficult situation.

We have three new chicks brooding in our basement.  We are hoping one of them is a rooster.  We will make sure to love them thoroughly and handle them gently, often.  We hope to have some cuddly chickens, and maybe even a loveable new rooster that can fill the shoes of his father, yet be a better leader of his girls, strength through peace.

This is my tribute to our snarky, feisty, beloved, behated rooster, the Boss Chicken as he was affectionately called by some; to me he was always, Mr. Roo.

It has been a busy day but I wanted to share our exciting news with everyone.  The eggs that we have been incubating for a few weeks are not just eggs anymore!! 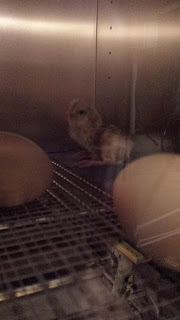 This morning while I was gathering feed for our goats I paused for a moment when I heard the distinct sounds of "PEEP,PEEP, PEEP coming from inside the incubator!

I peeked inside and saw two wet baby chicks that had safely emerged from their shells.  I quickly sat down the buckets of goat feed and ran inside the house to tell my husband that "WE HAVE BABIES!!!"  He jumped out of bed like a father who's wife has just gone into labor."  We both were so excited!

But, just as I realized that I had not packed my overnight bag for the hospital when my water broke and I went into labor with my son, I had not prepared the brooder boxes for the baby chicks to move into after we take them out of the incubator.  (I had it on my TO DO list yesterday, but...I thought they would not start coming until tomorrow.  But just like my beloved little boy, these two darlings were a little early in coming into the world.  Just too much fun stuff to do, I guess!! 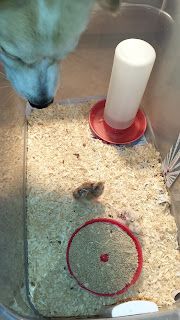 In the end we got everything done to settle them into their next little nursery.  Both babies seem very happy and relaxed.  They perk up and run towards my voice every time I say "Hello Little Peeps!"  Very, very sweet!  Margeaux is very excited to meet them too!

There are more chicks to come, and THE REST OF THE STORY, as to how we came about incubating these eggs in the first place...but for now, enjoy the first pictures of our exciting and precious new additions to our home farm!

Ronda
Posted by zinnias way at 10:26 PM No comments: